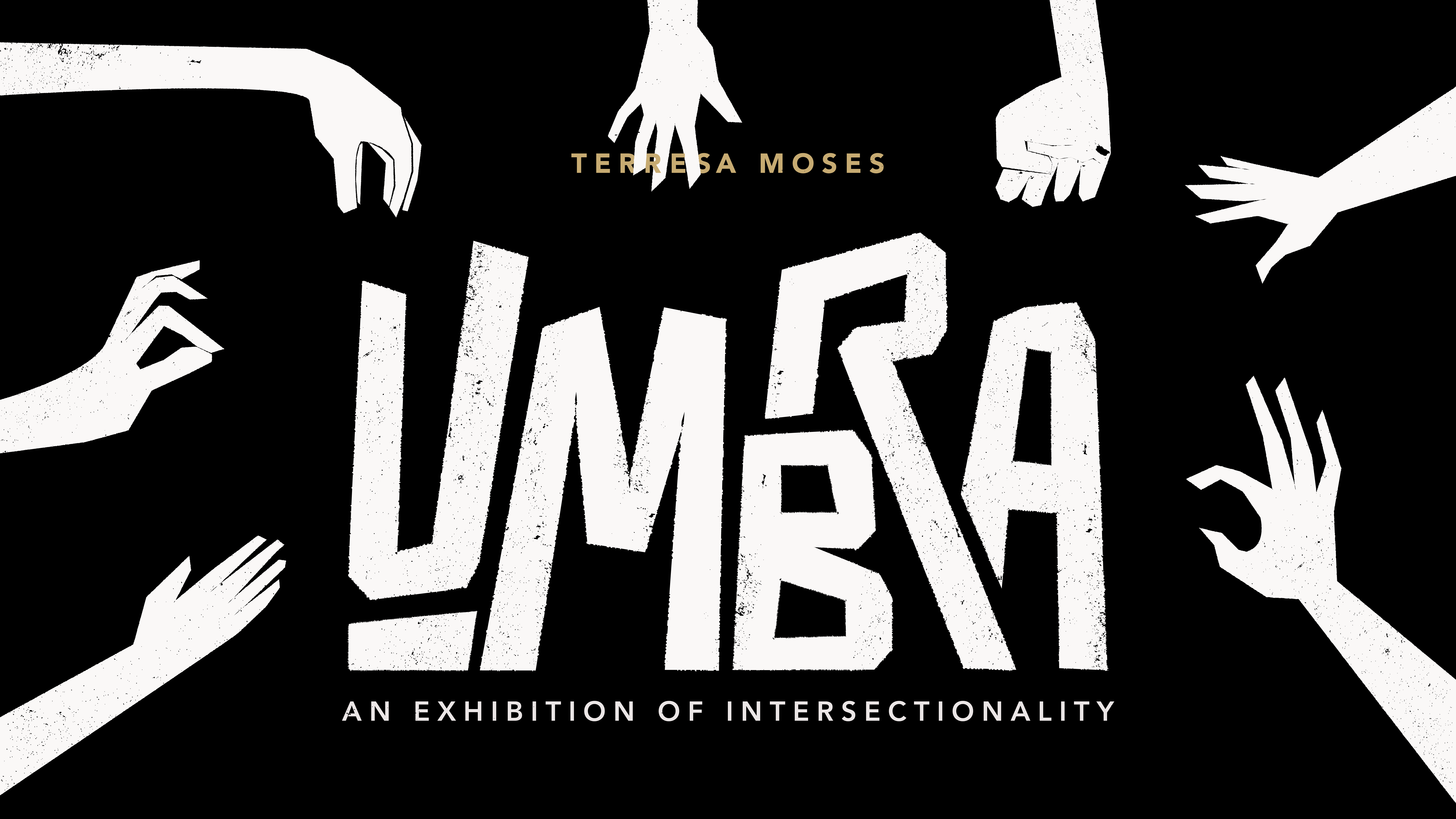 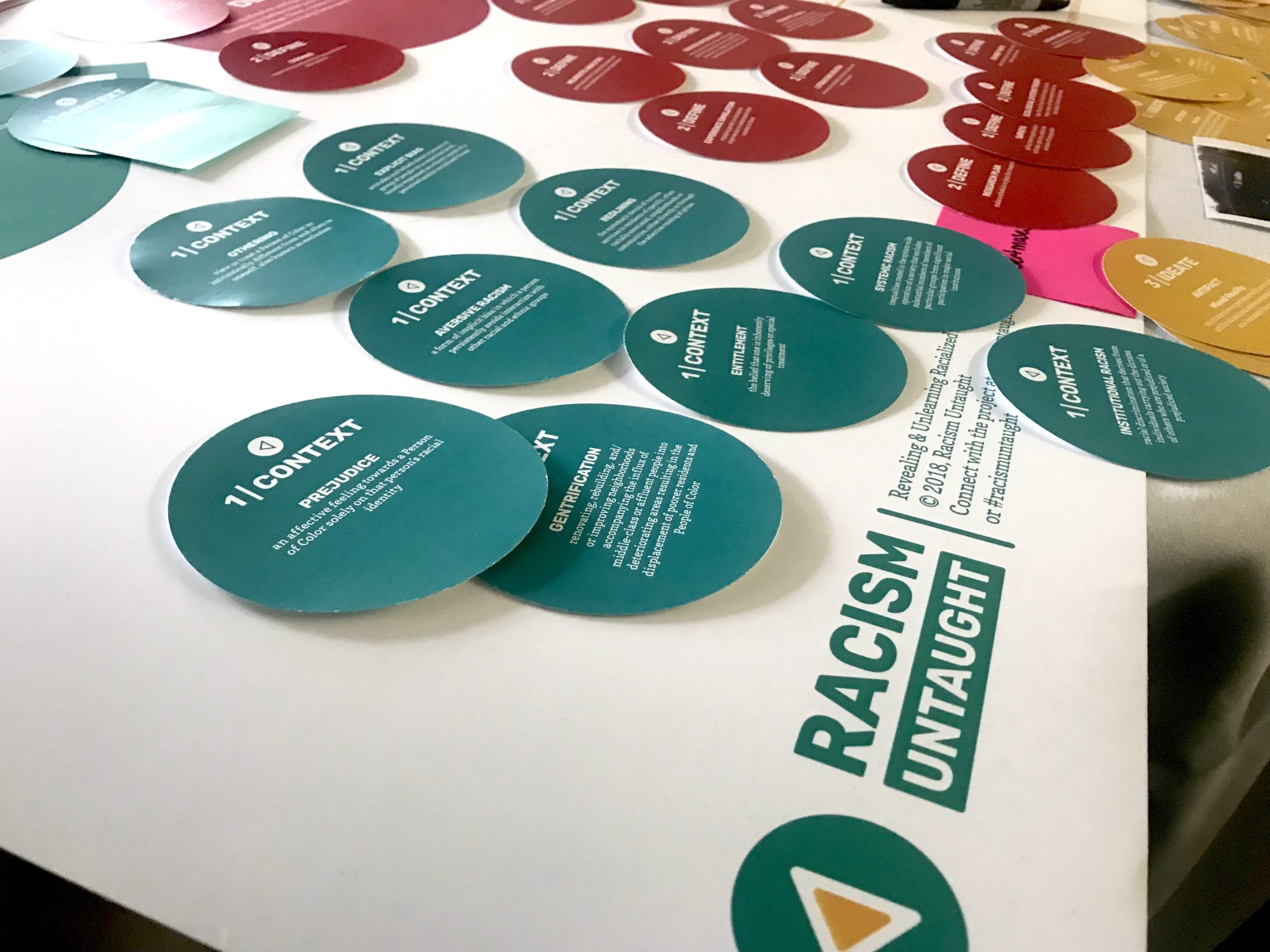 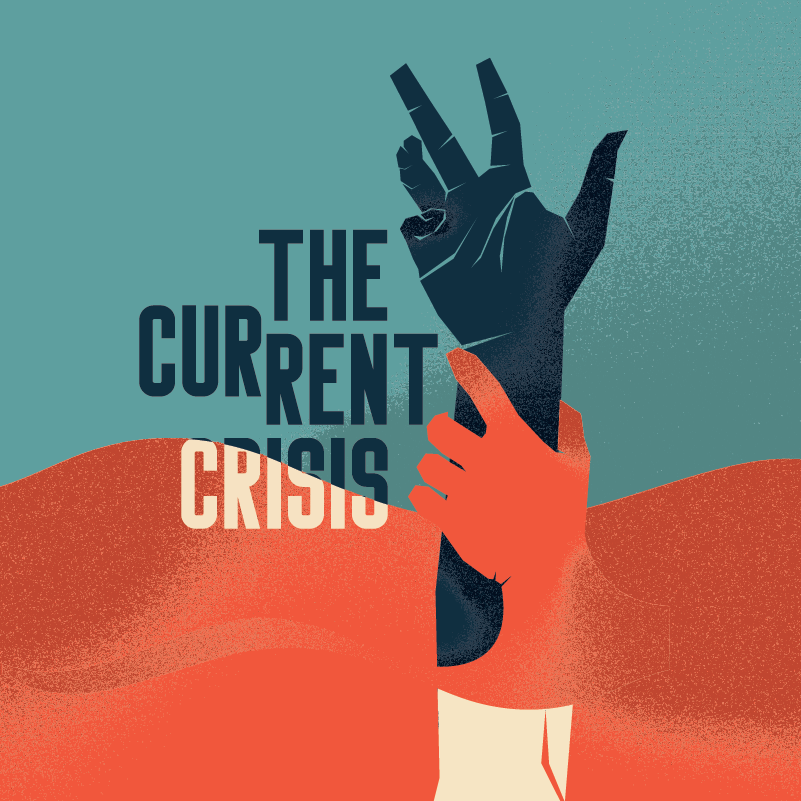 I had fun branding this year’s MLK Tribute Events which was themed by my design studio, Blackbird Revolt, The Current Crisis. The Duluth NAACP, whom we work with closely, chose this theme from the ones we provided. It came from an article by Reverend Martin Luther King Jr., submitted for publication in March 1958. In the full title, “The Current Crisis in Race Relations,” King tells us that the crisis had been affirmed by the reactions of the country to the Supreme Court’s decision to integrate schools. King goes on to explain that the crisis not only exists because of White resistance but because Black people saw themselves as equals; making it impossible to accept the system of segregation.

Dr. King speaks to the theological reasoning for nonviolence and integration. He believed that nonviolence was simply Christianity in action –“passive physically” but “aggressive spiritually.” Nonviolence combats the evil committed by individuals rather than combating the individuals committing evil. King says “ The tension is at bottom between justice and injustice, between the forces of light and the forces of darkness. And if there is a victory it will be a victory, not merely for fifty thousand Negroes, but a victory for justice and the forces of light.”

We used the theme as inspiration for the poster design, social media posts, postcards, t-shirt, letterhead, and a variety of presentations and programs. We designed a poster series to help the NAACP raise money for their efforts. We crafted the posters with the 2019 theme “The Current Crisis” in mind. The series follows a recognition of the crisis, a coming together, and fighting for racial equity.

In addition to the branding, I lead the Rally sub-committee, the largest event of the week and the largest turnout in the history of the event. As the Chair of the Rally, I put together a small dedicated committee, booked and vetted the entertainment, managed the stage, and helped bring the overall cohesiveness to the theme. My design studio, Blackbird Revolt, also participated in each event, either volunteering, organizing, and engaging the community.

Studying how design can help overcome the negative perceptions Black women come to know about their naturally afro-textured hair.

Project Naptural is an initiative for education, connection, and the overall empowerment of Black women with naptural hair. New data that supports the health risks chemical relaxers may have on Black women like fibroid tumors and alopecia. Secondary research (historical, scientific, psychological, sociological, and anthropological implications) along with primary research (interviews, observations, focus groups, surveys, etc.), has found the need for information about the many aspects of caring for Black naptural hair to be necessary. The project consists of a connective system in which this free knowledge may exists and empower Black women in both a physical space (The Nap Network 1.0: The Art Exhibition) and coming soon to a cyber space (The Nap Network 2.0: The Mobile Application).

After the civil war and the emancipation of Black people, the divide between Black folks grew even larger due to identifiers like skin color, hair texture, and education level. As more and more Blacks were freed, a refugee-type experience took place. The emotional refugee experience, a phrase coined by O’Neil & Tobolewska in Global Refugees, Ethno-mimesis and the Transformative Role of Art. The experience is defined in four phases which Black people have and continue to experience today.

Each individual has their own hair experiences, opinions, and ways of doing which can be found in a large ecosystem that affects or ripples into the next, often times without realization of the instances affect on others (or even yourself in the future). The ecological systems theory, developed by Urie Bronfenbrenner, also called the development in context or human ecology theory, is defined as a procedure that “identifies five environmental systems with which an individual interacts.” This theory provides the framework for the study the relationships and affecting factors..

After speaking and receiving opinions from over 200 Black women about their natural hair experiences, Project Naptural launched in January 2016 with an exhibition that celebrated the beauty and versatility of natural hair. I illustrated these posters with elements of anonymity, same skin tone, no facial features, feathers and leaves as hair texture, in hopes that every Black woman could see themselves in the illustrations. I added the title of the hairstyle, including quotes from my interviewees, and data which I complied after interviews, focus groups, surveys, and graffiti walls. 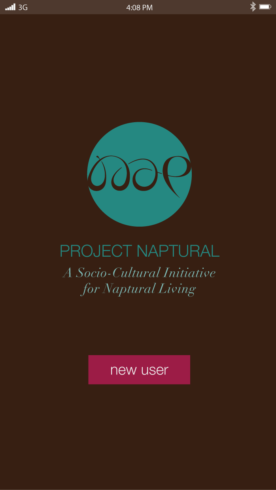 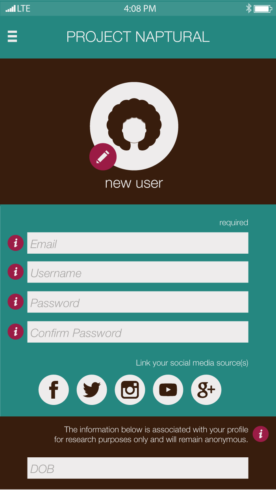 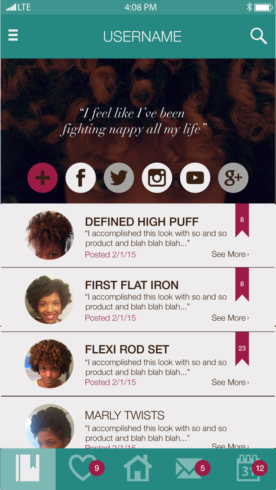 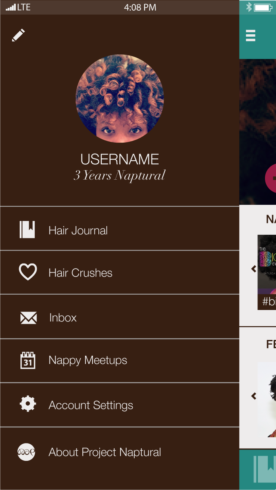 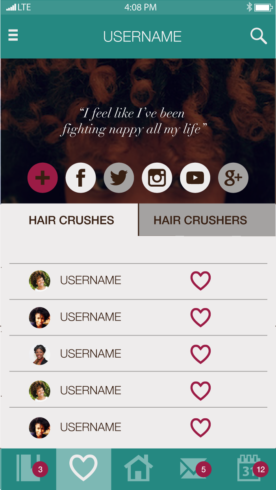 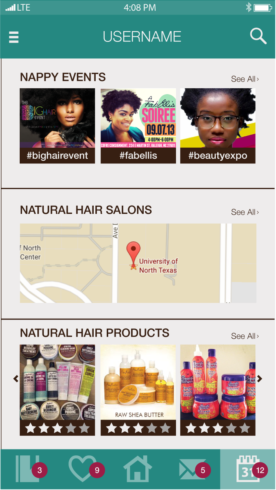 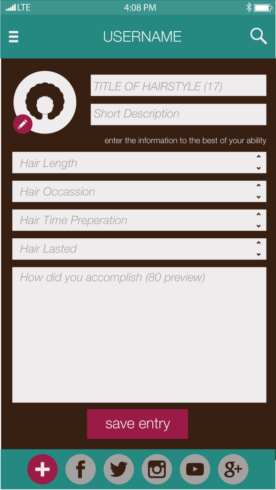 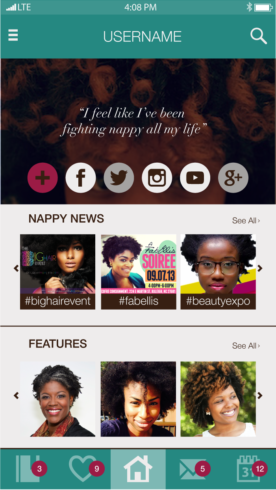 The Project Naptural app will essentially take the elements of the physical space and bring it right to the user’s phone. In the Natural Hair Community, there are certain hair products that are considered staples (conditioner, oil, water, etc.) and my hope is to create another hair staple for the Black woman. The app works by allowing the user to self-identify their hair texture, length, occupation, age, the time allotted for hair care, any coloring, etc., and then disseminate information that fits their hair type and routine. They can also hair journal, length check, and find natural hair meetups close to them.

The Project Naptural Workshops (6 total) consist of tutorials, discussions, journaling, & product-making for kinky and curly haired female-identified folks. Workshops are free, however, registration is required and participants must be residents of the Minnesota Northland Area, identify as female, and have (or legally guard a youth with) naturally curly and/or kinky hair. Project Naptural is an educational, grant supported, academic design research and cultural study about the social implications of natural hair and its effects on Black women.

The workshops are held at the Duluth Public Library and include the following topics:

This series was inspired by my speech at the 2018 Women’s March. Each poster represents a part of my speech included below:

“So excuse me if I side-eye your White feminism, or back-hand your White privilege to touch my hair, … or roll my eyes at your ability to say thank you without investing in what I do…”

The full speech can be found here.

These pieces were shown at the Phenomenal Art Show hosted by the American Indian Community Housing Organization celebrating women of color.

They were also exhibited at the What the Feminist (WTF) Art Show at the Washington Center Galleries. 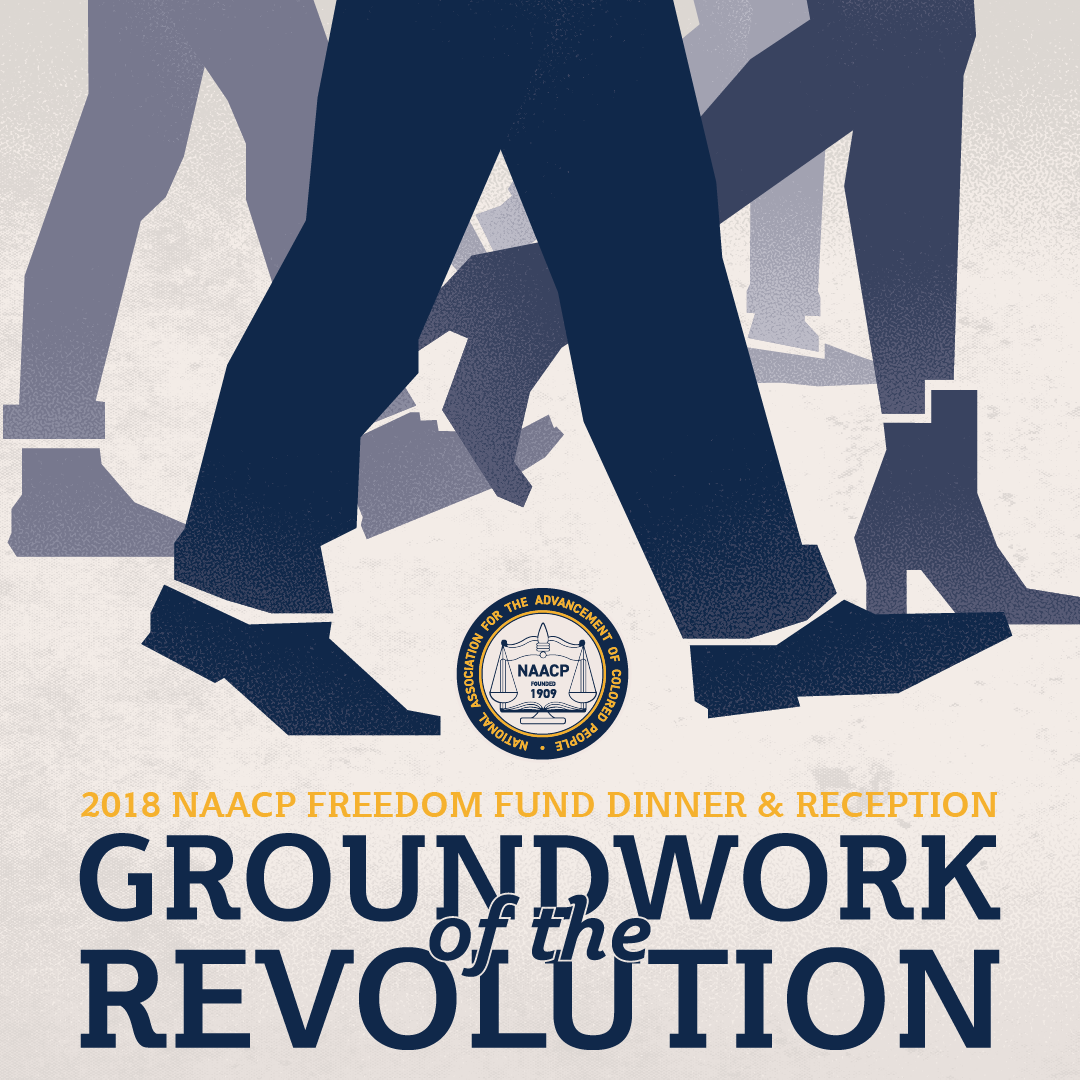 Groundwork of the Revolution

I had fun branding this year’s Duluth NAACP’s Freedom Fund Dinner which was themed by my design studio, Blackbird Revolt, Groundwork of the Revolution. The dinner was an opportunity for the branch to raise awareness, spirits, and funds. It was the first time the dinner has been held in over 20 years. The dinner was organized by the Freedom Fund Committee which I played an integral role in. Through Blackbird Revolt, I designed all the print and digital material to help promote and brand the event.

In addition to the branding, I lead many of the initiatives within the committee. We were organized as a collective, meaning that no one chaired the committee. I was able to secure most of the major sponsors, stage managed, booked and vetted the entertainment, and secured our keynote speaker, artist and activist, Seitu Jones.

This project is “an initiative that equips companies and organizations with knowledge and resources to create an authentic workplace that better engages employees to express their natural individuality resulting in enhanced productivity and happier employees.”

I collaborated with Tina Opie and Antonia Opiah to create an initiative that would help women tell their stories about natural hair an be empowered. As the design researcher on this team, I assisted in the gathering of data and writing the mission, created the branding system, designed the information graphics, and wrote the video script and created the video trailer. 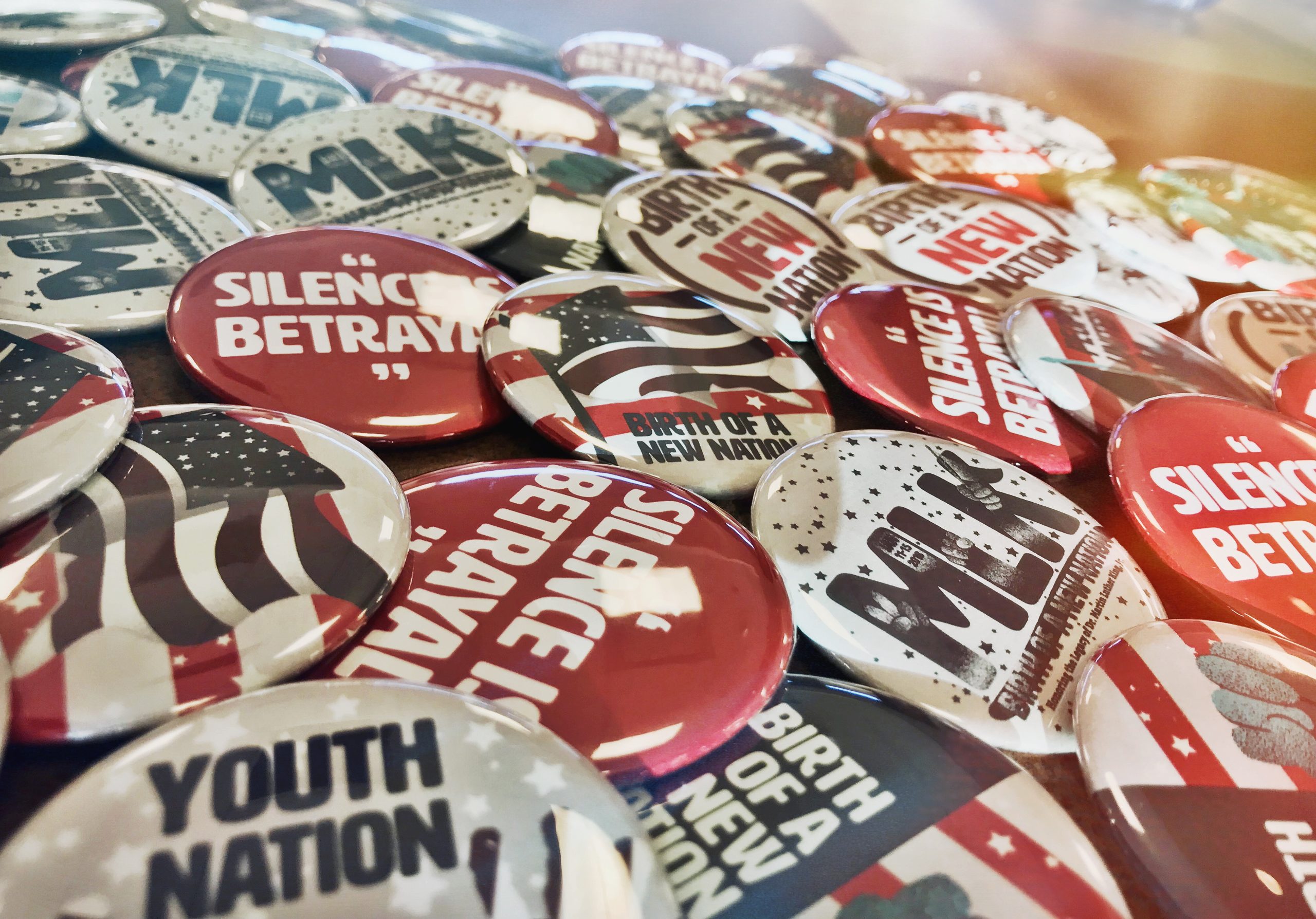 We used the theme as inspiration for the poster design, social media posts, postcards, t-shirt, letterhead, and a variety of presentations and programs.

In addition to the branding, I lead the March & Rally sub-committee, the largest event of the week of events. I booked and vetted the entertainment, managed the stage, and help choreograph the UMD Freedom Steppers. My design studio, Blackbird Revolt, also participated in each event, either volunteering, speaking, organizing, and engaging the community.

Heart Strings addresses my frustrations with folks who feel they have a right to my hair, my body, my Blackness, and my identity. It is a reflection of my experiences as a Black woman in a White world with Euro-centric beauty standards.

I created Family Photo as a way to validate my own history and racial identity, often forgotten in society. My African culture and heritage were stripped from my ancestry by way of slavery now being written in our history books as “indentured servitude.”

The illustrations in Counterfeit highlight the traits that I, as a Black woman, possess. These traits are often seen as unruly, barbaric, exotic, and overly-sexual — except when applied to someone with white skin.

After the first exhibition which included ‘Heart Strings’ and ‘Family Photo,’ I was asked to speak on a panel at Mia about my work and efforts to increase diversity and inclusion within the design field and AIGA Minnesota. My work was also displayed in the museum. Photo credit: Jay Larson.

These pieces are now being shown in the Tweed Museum of Art in the ‘Fine, Define, Refine’ Art Exhibition until August 2018.

This project is “a message from this generation to the next because now more than ever we’re in a position to define what’s beautiful and shape how the next generation feels about their hair. In this context, a #hairtie is anyone, be it a friend, sister, stylist or blogger, that has influenced the way you do or view your hair.”

I collaborated with Antonia Opiah of Un-Ruly to design the brand for the campaign, illustrate the women who gave their stories, and art direct the seven-part video series. See the campaign live at un-ruly.com.